What's the difference between OTAs and minicamp?

"I think the big difference is getting on a schedule that's kind of normal to a Wednesday or a Thursday during the season. You're here longer. You've got the walk-throughs that you'll be able to get on tape and work through and learn from, and correct those before you get to the practice. And there are some different things that go on. There's a little bit more of a mental edge. The practice might be similar (to OTAs), but at this point, we've gone over the installs and everything, so now it's just getting up running, making sure everybody's on the same page, knowing their assignments. And guys should be moving a lot faster now, because on the mental side, they should already understand what we're doing. I think that's the big difference between the OTAs and minicamp. If you look at the practices, they might not look different, but just from the standpoint of knowing what's going on, that's where the difference is."

How has the installation gone?

"There's some different things. It is the same offense that we were running, but there's a lot of tweaks in there, based on how Hue (new offensive coordinator Hue Jackson) likes to do things. So it's just getting the little things that he's doing down, whether it be motion, shifts, all the different stuff that we've got going on."

Hue is big on the QB being the field general, right?

"That's his big thing. He told me he wants to get the play in so he can start talking trash to the defense and not have to worry about. The rest of it is on me, getting guys lined up and everything. And that's how it should be. In a game-time situation, the quarterback is the one on the field getting guys lined up and everything, if it's not right. So Hue tries to create that atmosphere in practice."

Talk about the relationship between a new coordinator and QB …

"It's been a really easy transition. I had a great relationship with Jay (Gruden), and it kind of showed in what we were able to do, what he trusted me with, what he let me do at the line of scrimmage, all the different stuff that we had to do. Hue has done a great job coming in. We've had that relationship kind of from the beginning. Obviously he was here last year, so we had that going in. But just the amount of support and the trust I get, and knowing that I'm his guy, that I'm going to be running everything, is great. Everything with Hue is about the quarterback position, that he's the leader of this team. So from Day 1, it's been great."

"It's been great, just from the standpoint of the coach understanding what you're going through. Jay was great with it, and Hue as well. There's been a lot of emphasis on the other positions, exactly how we're going to do it, and regardless of what the other team's doing, this is what we're doing. So it's been a big part of helping with the timing of everything. He understands why you made certain reads. You can talk through things, and for a guy that's been in your shoes, he understands what you're going through. So it's good to have that perspective."

Could you have been a leader this way as a rookie?

"It's different. From there, you're trying to learn the position of an NFL quarterback, trying to learn what it takes to succeed at this level. It's easy to say the quarterback is going to step in and be the leader of the team,  but you haven't  been around guys who have been in the league for 8-9-10 years. So there's a difference. But I think where I am now, I've played a lot of games, I've been in this system a long time, guys know what they're getting from me. So it's obviously a whole lot easier now, going into year four, rather than being a rookie."

The receivers say they have to run a lot more to get into position in the up-tempo approach. How does it affect the quarterback?

"I think with them doing that, it helps with the timing of everything. We are doing some things differently. So it's making sure guys are lined up how you want them to, how we're doing our motions, that guys are going full-speed. With all that, it helps with the timing. They want to do everything quick. We want to do everything quick, too. We want our drops to be quick. We want to get back and be ready to go. And so the emphasis is on tempo this whole offseason. We've really been moving forward in that direction and it's been great."

Does Mohamed Sanu look different to you physically this year?

"Yeah, he does. He's not your typical slim receiver, maybe like Marvin or A.J. He's a guy that's bigger, and he's built a lot thicker, and he's running a lot better than I think he has the last couple of years. He looks smooth. I think his speed's increased. It's been fun to see all the things he does. He's a guy that's outside, inside, kind of plays all the positions. You need a guy on the team like that who can do it all."

Getting back to tempo, how does that affect getting rid of the ball?

"I think that's kind of what were talking about earlier, with the drops and different things. You want to get back and get it out quicker and trust our guys, and so there's certain things, whether it be the quick game, whether it be some of the deep throws down the field, that involve putting some trust in those guys and turning it loose a little bit sooner, and just let them go make a play. I think just the whole tempo of everything, whether it be the receivers running, the way I'm getting back, whatever we're doing, has really helped."

Are you comfortable playing with (free agent OT) Marshall Newhouse, your old teammate at TCU?

"Yeah, he's versatile. Playing on the left side, playing on the right side, I know he did it all in Green Bay. When I was in college, he was my left tackle the whole time, so I'm very familiar with him. It's nice having a guy that you're really close friends with, having been on another team and then having him come here. It's been cool. He's played in a lot of games, he understands what it takes to play. He's versatile and can move around. He's kind of that same mold as A.C. (Anthony Collins) was for us last year. So he's a great addition."

What does Marshall tell you about his experience in Green Bay?

"He obviously had a good experience. I think his rookie year, they won the Super Bowl. I think it's having guys on the same page all the time, going for one goal, striving to be the best. So they were the Wild Card team that year, and they did whatever it took to win once they got to the playoffs."

What did you think about Colin Kaepernick's contract extension?

"I was happy for him. He's a guy who has done a lot and has achieved a lot. I was happy that he was able to get something done."

It's really a bunch of one-year deals. Is that good or bad for a QB?

"I don't know exactly how it's structured, but you want to be able to earn your way. I'm sure he was trying to get as much as he could guaranteed. But at any point, if you're not up to the par that they want you to be, it gives them a chance to cut you, to decide to part ways. So you look at it from a standpoint that yeah, it's a bunch of one-year deals, but you should have full confidence in yourself that you're going to go out and earn every year that's put on that deal."

How might his deal affect your talks about a new deal?

"I think the biggest thing is that it got done. That's one thing that you see, that they took the time and were able to find a middle ground and get it done. So I'm hopeful that will happen for me soon."

"Right. I think it kind of all depends on the team, its cap room. There's a bunch of different factors that go into it. Obviously you want to do something where you have guys around you that are going to help you out and help you be successful as well. 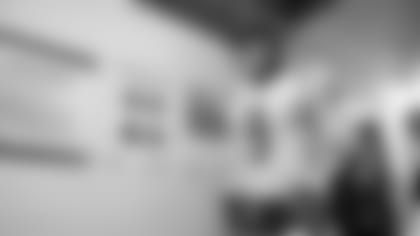 Everything Zac Taylor Had To Say After Beating the Ravens

Everything Zac Taylor Had to Say After Beating the Patriots

Everything Zac Taylor Had To Say After Beating the Buccaneers

Everything Zac Taylor Had To Say After Beating the Browns